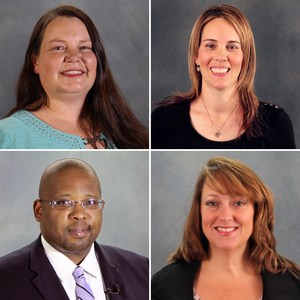 Some school names are set to change a bit this Fall, but the leadership on those campuses will largely stay the same. The Bryan ISD Board of Trustees unanimously approved the district administration’s recommendation for principals to guide the Jane Long, Stephen F. Austin (SFA), Sam Rayburn and Arthur Davila campuses through a new grade configuration and realignment that takes place in the Fall of 2017.

Returning to the principal’s post at their current school in Fall 2017 will be Cody Satterfield, Jane Long; Justin Smith, Sam Rayburn; and Shannon McGehee, Arthur Davila. Rachel Layton will serve principal at SFA Middle School, moving from her post as associate principal at Rudder High School.

Bryan ISD’s new grade alignment was the result of support from the Board of Trustees and the voters of Brazos County. In November 2014, a bond referendum passed with strong support in order to reconfigure grades, improve and expand facilities for student learning, eliminate portable buildings and address a wide variety of priorities identified in a facility study. The centerpiece of the bond proposal realigned grades and reduced the number of middle schools from four to two. The change is expected to enhance student success by more closely pairing similar maturity and learning styles (pairing fifth graders with sixth graders and seventh graders with and eighth graders). The move also reduces the number of schools that highly-mobile students would have to adjust to, if their families move frequently.

As a result of realigning grades and restructuring Milam Elementary to become the new MC Harris School of Choice, the Board of Trustees approved new attendance zones in May 2016.

The board also approved the pathway for advanced academics and increased the opportunities for students to participate by extending the District’s popular INQUIRE and Odyssey programs beyond grades six-eight and into to the new fifth-sixth grade campuses. At the seventh-eighth grade campuses, Odyssey will continue at SFA and the INQUIRE program will move to Davila.

For the district’s dual language program, the board approved a pathway for students to attend: Johnson/Henderson (elementary) - Jane Long (intermediate) - Davila (middle school).

Cody Satterfield, Jane Long Intermediate School Principal (Fall 2017)
Cody Satterfield was named principal of Jane Long Middle School in June 2016. Prior to joining the administration of Jane Long as an assistant principal, she served four years as assistant principal at Sam Rayburn Middle School. She began her career as a successful chemistry teacher and was known for high rigor and innovative teaching. Satterfield has served in Bryan ISD since 2006. She earned a bachelor of science degree in animal science from Texas A&M University and a master’s degree in education, also from Texas A&M.

Rachel Layton, Stephen F. Austin Middle School Principal (Fall 2017)
Rachel Layton joined Rudder High School as assistant principal in 2013. She was promoted to associate principal in 2016, where she oversaw assistant principals, campus improvement planning, data collection and analysis and aspects of professional development and instruction. Prior to serving in administration, she served in roles of increasing responsibility from coaching to teaching AP and Pre-AP World History at campuses including Rayburn, Bryan High and Rudder High.

Justin Smith, Sam Rayburn Intermediate School Principal (Fall 2017)
Justin Smith was appointed principal of Sam Rayburn Middle School in May 2016. For more than a dozen years he has served as an administrator, teacher and coach. He previously served as assistant principal at Bryan High, and prior to that he was a teacher/coach at Rockwall-Heath High School in Rockwall ISD. He began his teaching career at Travis Middle School in Temple ISD. Smith holds a bachelor of science degree, minoring in special education, from Tarleton State University and a master’s degree in education from Lamar University.

Shannon McGehee, Arthur Davila Middle School Principal (Fall 2017)
Shannon McGehee has served as principal at Davila Middle School since June 2013. Previously she was associate principal at Rudder High School and assistant principal at Sam Rayburn. She began her career in education as a Bryan ISD substitute teacher and later transitioned to become a homebound teacher for the District. She taught middle school mathematics in both Bryan ISD and College Station ISD. McGehee earned her bachelor of science degree in interdisciplinary studies from Texas A&M University. She also holds a master’s degree in educational administration from Texas A&M.

To learn about grade realignment and the November 2014 bond referendum, visit:
http://www.bryanisd.org/apps/pages/index.jsp?uREC_ID=276493&type=d&pREC_ID=868062

To learn more about the Fall 2017 options for advance academics, visit:
http://www.bryanisd.org/apps/news/article/557618

To learn more about the Fall 2017 pathway for dual language, visit:
http://www.bryanisd.org/apps/news/article/561098