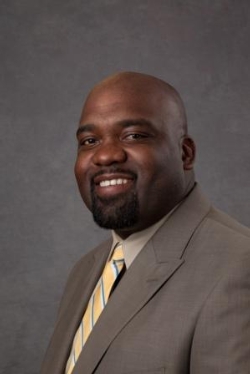 The Bryan ISD Board of Trustees unanimously approved the hire of Bennie Mayes as principal of Rudder High School during its noon workshop May 4. Mayes, who has served as principal of Schultz Jr. High in Waller ISD since 2009, has held leadership roles in public education stretching back more than a decade.

Mayes began his career in Bellville in 2002, serving as a football, basketball and track coach. He also taught health and P.E.

“Mr. Mayes brings an outstanding combination of skills and experience to Bryan ISD,” said Superintendent Tommy Wallis. “He has served in various elementary, middle and high school roles and will bring to his new position a deep understanding of academic rigor and a strong philosophy about building relationships. Mr. Mayes fits well within the attributes our community said they wanted in a recent survey about Rudder’s next leader.”

Current Interim Principal Crystal Goodman, who normally serves as executive director of human resources and administration, will finish the current school year at Rudder. She will return to her full-time role in Human Resources after graduation.